Are you facing
criminal charges?

We will fight to protect you.

Being accused of a sex crime is a devastating experience and can destroy your reputation—even if the allegation is entirely false. Unfortunately, false allegations of certain sex crimes are not uncommon. They happen in bitter divorces and nasty custody battles, relationships that are on the rocks, and as a cover-up for consensual sex. And although you are supposed to be considered innocent until proven guilty, you may find that many people are ready to try and convict you in the court of public opinion, regardless of the truth or falsity of the accusation, that’s why you need a seasoned Tacoma sex crimes lawyer in your corner.

If someone has accused you of a sex crime or is threatening to accuse you, you need the best lawyer available. In Tacoma, for experienced defense against a sex crime allegation, call the law office of Mark S. Treyz. Mark has been practicing law in Washington for over 30 years and has been both a prosecutor and a pro tem judge. He understands how the system works from every angle and will use that knowledge to provide you with a powerful defense. Schedule a free consultation with an experienced Tacoma criminal defense lawyer now.

These are some of the many types of sex-related crimes the Law Office of Mark S. Treyz defends:

If the police or Child Protective Services are attempting to interview you, even if they say you are not under arrest, do not speak to them unless you have your sex crimes lawyer present. Mark Treyz will ensure that your rights are not violated at any point in the investigation.

Living through a sexual assault experience can be traumatizing for years after the incident occurs. Sometimes, it takes this long to fully process the events that took place. When a survivor recognizes the damage that sexual assault or rape has caused, they can seek the consult of a skilled Tacoma sex crimes attorney to determine what options they have to seek compensation for their damages.

The person agrees to the sexual activity under manipulation, coercion, threat, or force. 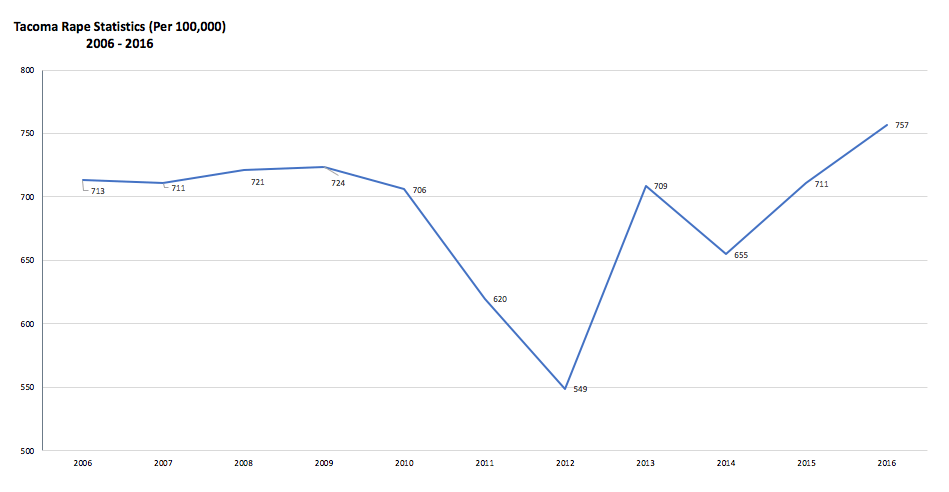 While a rape crime is a serious offense, false allegations do occur and the repercussions socially, professionally, emotionally, and otherwise on a falsely accused person can be catastrophic. Mark is a talented and dedicated Tacoma sex crimes lawyer who will fight to keep his clients out of jail and maintain a clean criminal record. If you or a loved one is being charged with rape, contact our Tacoma sex crimes attorney today.

What Counts as Sexual Assault?

Notice that not all instances of assault involve penetration or actual skin-to-skin contact. Attempting assault and touching over clothing also count because the assaulter conducts them without consent.

Statute of Limitations to Pursue a Sex Crime in Washington State

The statute of limitations is a law that sets a time limit for pursuing certain criminal charges. If a person tries to press charges after the applicable deadline passes, the court will dismiss the case. Different crimes are subject to different statutes of limitations in Washington state.

Under Washington Revised Code 9A.44.010(7), consent refers to the actual words or conduct that indicate freely given agreement to have sexual intercourse or sexual contact. This consent must be given at the time of the act of sexual intercourse or sexual contact. Freely given consent means that the person who is providing the agreement has a genuine choice.

In addition, a person cannot consent to sexual activity if consent is obtained through coercion, pressure, or forcible compulsion. Forcible compulsion refers to physical force or a threat that places a person in fear of death, injury, or kidnapping.

Penalties for these crimes range based on severity and the circumstances. The more violent the crime, the higher the charges will usually be.

A sex crime is unlike others in the sense that if you’re convicted, your punishment does not end when you’re done serving your time; you’ll be required to register as a convicted sex offender anywhere you live, possibly for the remainder of your life. Your address, photograph, and charges will be on the Internet—forever—for everyone to see. You’ll be restricted from living in certain areas and doing certain kinds of work. You’ll never be allowed to escape the stigma. You could even be held in custody indefinitely in a “civil commitment” after your sentence is complete.

Having a skilled Tacoma sex crimes attorney in your corner from the earliest stages can make a significant difference in the resolution of your case. Whenever possible, Tacoma sex crimes attorney Mark Treyz will work to keep charges from being filed. He will investigate the police procedure leading up to your arrest to identify any irregularities or violations of your constitutional rights. He will look into the background of the accuser to discover possible motives for making a false accusation. If you are a minor or a first-time offender, he will advise you on possible diversionary programs and pretrial interventions that could result in charges being dropped. If you are charged, he will use any legal means at his disposal to have the charges dropped or reduced. He will minutely analyze every piece of evidence and explore every possible strategy to find the best defense to prevent a conviction that could destroy your life.

How an Attorney Can Help You with a Sexual Assault Charge

Facing sexual assault charges can be intimidating alone. When you hire an attorney to handle your case, your attorney will be able to guide you through the process and provide advice. Your attorney will also have the training, experience, and resources to build a strong defense on your behalf.

If you’re an adult or juvenile who has been accused of a sex crime, you need legal assistance now. To protect your rights and your future, contact the Tacoma law office of Mark S. Treyz to schedule a free consultation and talk about your options. Call our office today to start working on your case (253) 272-8666